A Bit of History

In 1979, RMT co-founder and Chairman Bill Harvey began a newsletter which for twenty years helped the media industry transform itself into the interactivity-centric systems of today.

In 1981, when the three broadcast television networks had an 86.5% share of U.S. TV household audience in prime time, Bill published the projections below in his newsletter which was called Media Science Newsletter. He called a 60.4% share for those three networks in 1990 (shown on the second data page below), and when 1990 came around, that share turned out to be 62%, as corroborated by this newspaper article.

FOX programming every night except Tuesday and Wednesday in 1990 probably accounts for the difference between the projection and the reality. FOX didn’t exist when Bill made his projections, it was launched in 1986, and was counted in the 62% cited in the article.

The point of including this bit of history in the Bill Harvey Consulting website is that it is possible to make accurate media predictions even years into the future, if one has sufficiently robust data sources and an understanding of the interactions among many variables. The Rogers Diffusion of Innovations curve is a key underlying variable to be considered in all such long-range projections.

Also in this website you will see projections from now into the future of how streaming and Internet Protocol TV (IPTV, i.e. television content transmitted via the Internet rather than over the air, cable or satellite by earlier standards such as radio frequency quadrature amplitude modulation) may roll out.

We are not so confident that the projections from 2022 to 2030 are going to turn out to be as accurate as those made from 1981 to 1990. A lot depends upon the world economy, world ecology, interspecies rivalry (viruses vs. humans), intraspecies rivalry (humans vs. humans), regulatory environments, concentration of economic power (FAANGs and Asian tech companies vs. everyone else), and even the wisdom of marketers/media companies in making more ROI with fewer ads per hour (a feature of streaming)—which depends upon amplifying the effects of brand messaging by means of targeting and resonant context selection, the latter being where RMT leadership is focused. 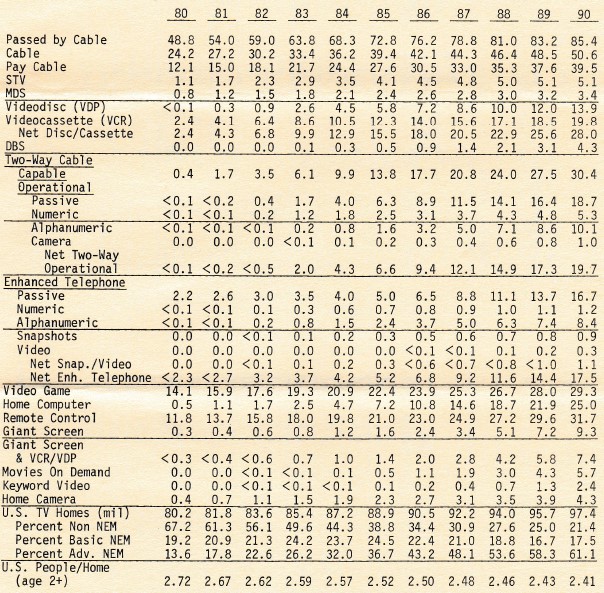 Basic NEM = Home has any of the following: basic cable/STV/MDS/DBS/videogames; but not other NEM.

BHC PRELIMINARY FORECAST OF US TV AUDIENCE SHARES BY
BROADCAST, CABLE, STREAMING, AND OTHER
2021 TO 2030 MIDYEAR EACH YEAR
TV SETS ONLY (NOT COUNTING VIEWING ON COMPUTERS, TABLETS OR PHONES)
2021 BASED ON NIELSEN GAUGE JUNE 2021
STREAMING INCLUDES IPTV IN ANY FORMAT